In the Heat of the Night

This column was originally written in January 2009.

Last month, I traveled to Atlanta to visit a “Dialogue in the Dark” exhibit, wherein participants are plunged into total darkness and led through several scenarios and arenas by a blind guide. The formal goal of this exhibition is to promote awareness of blind and similarly disabled people by enabling participants to experience life as they do. I suspect that many ticket holders aren’t entirely selfless and also visit for the thrill and the novelty. I’d like to say I was in the former camp, but there was admittedly something about stumbling around in the dark that sounded exciting.

As I approached the entry point of the tour, I was provided with a cane and lead to a seat in a weakly lit room. I was pleased to see that there were several young, giggling children present. If I were to get separated from my group, I schemed that I could follow the sound of their shrieks back to safety. The lights slowly dimmed as a resonating pre-recorded voice reassuringly introduced the exhibition. It gently informed us that darkness is often associated with danger, but this is seldom accurate. Just seldom? A wave of anxiety passed over me as I was enveloped by the inky blackness of pure, unadulterated darkness.

Out of nowhere (but then again, so everything seemed in the dark), we heard the voice of our tour guide instructing us to slowly stand and make our way towards him. And so began our dialogue. I’ll save you from the details; I recommend you experience the tour yourself, but as I stumbled through the various rooms and scenarios, leaping away from the inquisitive hands of my sightless companions (there was more awkward groping than at your typical high school prom), I envied snakes.

We humans like to think that we are the pinnacle of biology, perfectly suited for any situation. But, we tend to stick to circumstances that we’re comfortable with, restricting most of our activity to the daylight hours. There are actually entire senses that we completely lack, including the ability to detect heat. In the woods, in the dark, it is this sense that allows pit vipers to find their prey.

There are five species of pit vipers in our region, including cottonmouths, copperheads, and timber, diamondback and pigmy rattlesnakes. Ever wonder why they’re called pit vipers? Each of these snakes has a small opening in front of each eye that leads to an organ that can detect infrared rays given off by heat. 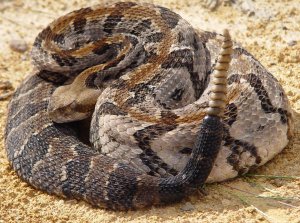 Light is made up of different wavelengths; the length of each wave determines what color we see. But there are waves with lengths well beyond what humans can detect. Infrared rays are made up of wavelengths in this category.

Infrared rays hit a membrane within the snake’s pit organ; where the rays hit signify to a snake the relative location of a warm prey item. Warm objects stand out against a colder background (watch the movie “Predator” for a stylized representation) and since a snake has a pit on each side of its face, it’s able to pinpoint the location of unlucky mice or rats that scurry by.

It’s a surprisingly accurate system; you just try to grab a mouse with your eyes closed. The pit organs are so sensitive, vipers may detect when something is 0.4 degrees Fahrenheit (or less) different than its surroundings.

Who needs eyes when you can see heat? A pit viper would not have been as awkward in the dark as I was, tripping over my cane, trying to get my bearings, all while attempting to figure out what I was touching, which at least once included someone’s backside. As to how warm it was, I couldn’t accurately say.

Thermal camera photograph of yours truly courtesy of Richard Bryant