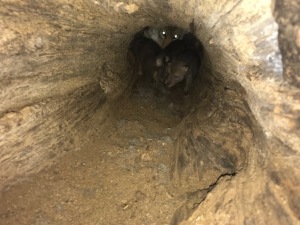 Hi LAW,
Could you please identify as coyote or wolf.
Thank you very much for your help!
Mark S.

The identification between wolves and coyotes is often confused. The first thing to consider is their range. Historically, coyotes were restricted to the prairies that are west of the Mississippi River and into Central Mexico. However, due to logging, clear cutting for agriculture, the extirpation of the gray wolf and the rise of white-tailed deer populations in the 1800s, coyotes have expanded their range significantly. By the 1930s, they had dispersed around the Great Lakes and up into the northeastern states. Now they inhabit deserts, grasslands, mountains, forests, and rural and urban environments throughout the United States, Mexico, Central America, Canada and most of Alaska.

Wolves currently range throughout Alaska, the Northern Rockies, Pacific Northwest, the Great Lakes region, and Canada. The Mexican gray wolf is a subspecies that inhabits the Apache National Forest in southeastern Arizona in a very small population of roughly 113 individuals.

Although at first glance wolves and coyotes can look similar, there are some characteristics that set these two distinct canids apart:

Coyotes weigh between 30-50 lbs, stand between 16-24 in. at the shoulder and are about 4 ft. long. Wolves weigh between 55-130 lbs, stand at 26-34 in. at the shoulder and are between 4.5-6 ft. long. Coat colors of coyotes vary from grayish tawny in the North, to a lighter tawny in its southern range. The underside and throat of both canids usually have buff or white coloring. The forelegs, sides of head and muzzle are a rusty shade on coyotes. Coyotes have a dorsal stripe formed by black-tipped guard hairs, as well as a black-tipped tail. The color variations of wolves range from white to black, and every shade of tawny in between with black-tipped guard hairs. Both coyotes and wolves have a black “diamond” marking on their tail up near the base that is where a scent gland is located. Coyotes are identified by their large, pointed ears, and narrow muzzle in comparison to wolves. Wolves have rounded ears and a broad muzzle. Both have long legs designed for endurance.
Northeastern coyotes are described as having more of a German Shepard-like appearance. Coyotes in this region are larger than those found anywhere else. This is attributed to the confirmation that northeastern coyotes share mitochondrial DNA (mtDNA) of eastern wolves. Many in the population also share mtDNA of domestic dog.

The animal in the photos sent in by Mark S, is of a coyote mother and her pups that appear to be about a month old. Breeding takes place between January and early March, and gestation last about two months. Pups are born between April and May into litters that average to around 4-5 pups. Den sites vary from rock ledges, hollow logs, and brush-covered slopes to depressions above the ground. Wolves have the same breeding period, gestation length, average litter size, and have similar den sites.

Katey Duffey resides in Canton, Ohio, and has always had a passion for carnivore conservation. She has a B.A in Zoo and Wildlife Biology from Malone University, and a M.A in Zoology from Miami University. Katey has worked with a variety of species of reptiles and small mammals, and worked with captive and wild wolves. Currently, she is an independent researcher who has studied snow leopards in western Mongolia since 2014, with an interest in One Health that connects the wellbeing of a local community and their livestock with that of wildlife. She is also the Communications Director of The Tulsi Foundation, a UK-based organization that trains conservation staff and rangers in India trauma medicine where she uses her combat lifesaver experience from the Army and skills in wilderness medicine.