It’s a killer 95 degrees on the sand prairie today, so I was ecstatic when this western #hognose snake accepted several big gulps of water from my bottle!#SharingIsCaring #SciComm #Herpetology #HERper pic.twitter.com/rRtH03VtjL

The work day began for us at 4:30 AM. We loaded up the field truck with our equipment and were on our way. It’s not always easy getting up before the sun, but it is worth it knowing that you increase your chances of finding some really fantastic snake species by doing so.
Tristan and I are field research assistants for herpetologists Dr. Mike Dreslik and Dr. Chris Phillips at the Illinois Natural History Survey. Our task over the last few weeks has been to explore several sand prairies in Illinois and document the species of herpetofauna (reptiles and amphibians) we encounter. Surveys like these are critical because they can pinpoint locations of protected species and allow biologists and land managers to implement the best practices to maintain the habitats of these creatures.
Just as we arrived at our site, the sun began warming the prairie. We walked slowly across the landscape with our eyes glued to the ground, hoping to encounter a snake. During the summer, many diurnal snakes become active just after sunrise before temperatures become exceedingly hot, so this is a great time to look for them. This particular morning was very warm and the temperature was rising quickly, even at an early hour. Despite the increasing heat, we continued our search, meticulously combing the prairie. 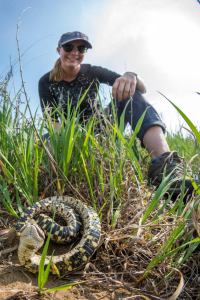 After a morning of searching – and multiple previous visits to the site with limited success – our efforts finally paid off. A western hognose snake, Heterodon nasicus, was spotted moving through the sandy vegetation, most likely looking for a meal (these snakes love turtle eggs!). Tristan picked up the snake and she immediately “played dead,” a defense mechanism commonly seen in hognose snakes. Western hognose snakes are state threatened in Illinois and live only in a few scattered places across the state, so encountering one of these snakes in the wild was extremely exciting for us. We brought the snake back to our field truck to collect some valuable data from her: we recorded her length, mass, and sex, and took a scale clip as a tissue sample.
By the time we finished processing her, the temperature on the sand prairie had risen noticeably. It was a cloudless, windless day as well, which enhanced the heat of the sun. Tristan and I were both in need of a water break. We got our bottles from the truck and sat down with the snake before hiking back to the capture location to release her. With temperatures this intense, the snake would normally be down in an underground burrow by this point in the day, so we thought she may be experiencing slight dehydration. Tristan wondered if she would accept water from us – so we gave it a try! 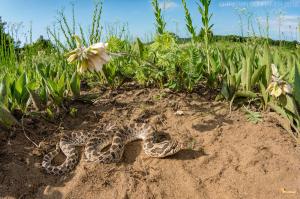 I took the lid off of my water bottle and filled it with water. Tristan held the snake up to the lid and she immediately began to drink from it! She took many gulps of water before it occurred to me that I should record this very cool experience. Even after I stopped filming, the snake continued to drink. We were happy that she accepted water from us and it made us feel good to make up for any inconvenience we may have caused by temporarily removing her from her habitat. 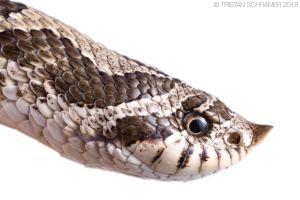 Responses to my video have been almost entirely positive! Most people that comment on the video state that they have never seen a snake drink before and that seeing this happen helped ease their fears by allowing them to relate to the animal in this way. Some have stated that they didn’t know wild snakes could be so docile. Others are moved by the fact that humans would act so kindly toward a scaly, misunderstood creature and have thanked us for our actions.
Snake conservation and education is important to us. We consider ourselves lucky to have the opportunity to study these underappreciated animals. Working with rare and understudied snakes such as the western hognose allows us to collect data that can guide conservation actions for the species. Another snake species that we are studying this season is Kirtland’s snake (Clonophis kirtlandii). This snake is also threatened in Illinois and has declined markedly through its entire range. Because it is a small, secretive snake that lives underground inside crayfish burrows, many people don’t get to see how spectacular it is.

But, we need the public to recognize these animals and their beauty. We need the public to share their observations with scientists. We need to communicate, educate, and conserve. Public observations may be one of the only ways that populations of rare snakes, like Kirtland’s snake, can be documented on a broad scale. Scientists can’t be everywhere at once. Indeed, we all are the experts in our own backyards, stomping grounds, and fishing spots. We just need to do a better job of sharing it*.
The future of conservation lies in the hands of everybody, scientists and citizens alike. Sometimes this is as simple as submitting a photo to your local biologist or offering a hognose a drink. When will you take a sip?
*One way you could share your reptile and amphibian observations with scientists is through HerpMapper, a mobile and online application for reporting your encounters!
About the Author 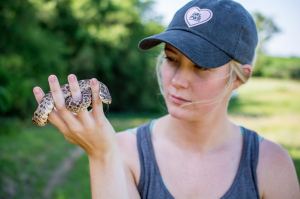 Taylor West is from northern Illinois and earned her BSc from the University of Illinois at Urbana-Champaign. She has a strong passion for wildlife conservation and herpetology, plans to attend graduate school in 2019, and hopes to eventually become an MD-PhD physician scientist. Currently, Taylor is working at the Illinois Natural History Survey, assisting with multiple reptile and amphibian studies. Her primary focus for this season is Kirtland’s snake research, a project that is important to her because of the relatively understudied nature of the species. Taylor will be performing research in South America later this year and hopes to broaden her understanding of the natural world by doing so. She can be reached at by e-mail here.
This post was made possible in part thanks to financial support provided by The Mindlin Foundation to David Steen to support blogging and science communication activities.