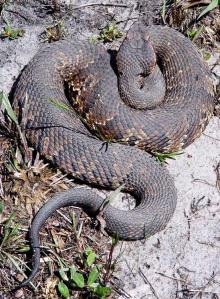 Is there an animal that is more misunderstood, persecuted, and maligned than the Cottonmouth? If you can think of one, let me know. Cottonmouths tend to mind their own business and stick to their swamps, but they are fascinating animals. They fight each other over mates, they eat a wide variety of prey (with different strategies for hunting different creatures), they migrate to take advantage of amphibian congregations and to escape unfavorable weather conditions, and they have an incredible warning system: their characteristic white mouth.
But, is that what the general public thinks of when one speaks of Cottonmouths? No, we have breeding balls and deadly nests and aggressive snakesthat chase you and try to get into your boats (or drop in), all myths, of course. And don’t forget all the harmless and non-venomous watersnakes whose only fault is that they resemble the Cottonmouth too closely and are killed by the thousands because of mistaken identity. Don’t believe me? Check out #watermoccasin on Twitter. Not only are all these snakes misrepresented and feared, but many people don’t even know that Cottonmouths should actually be the least of their worries: they don’t live anywhere near them. And where there are no Cottonmouths, watersnakes should be safe, because nobody will make the mistake of confusing them.
It is hard to fault most people from being confused about where Cottonmouths can be found when television programs on Animal Planet actively deceive them. This really should not surprise anyone, given that the channel tries to convince people that mermaids are real and that shows about killing rattlesnakes are worth watching.
Recently the program that features the Turtle Man – the character that shot to internet fame a few years ago because of a classic clip demonstrating his enthusiasm (and rebel yell) at diving into the mud to catch snapping turtles – ran an episode about how he was asked to remove some Cottonmouths from a public swimming pool in eastern Kentucky. Eyebrows were rightly raised by Kentucky herpetologists; Cottonmouths can only be found in the western portions of the state.

I believe that some of details around this curious discrepancy have not yet been sorted out and there are some intriguing allegations surrounding the case and who profited (this article also notes that the Kentucky herpetologist who initially pointed out the error was asked by Animal Planet to sign a statement agreeing to stop talking about it). But, I think it should be clear to everybody that Cottonmouths were released into a pool in a region where they do not occur and then Turtle Man got them out. (Update, the ‘story’ has been confirmed as bogus)
Unfortunately, I don’t know that many viewers followed the controversy that arose after the episode aired. For many folks, this show is one more reason to fear any and all aquatic snakes in eastern Kentucky, even though there are not really any Cottonmouths there. Too many snakes, including harmless watersnakes, are killed as a result of this misinformation and fear; Animal Planet is promoting and spreading both.

***An earlier version of this post contained an error in the title, thanks to Brian Folt for pointing it out.***