Cougars and Wolves in the East: Why Many Don’t Want Them Back —Guest Post—

In my last post, I addressed the question of whether there was biological room for cougars and wolves in the eastern United States. And the resounding answer was YES. I finished that post with the second most important question regarding the return of these species to the East: Is there sociological and political “room” for their return?  Would we, as a dominant species, allow them back? Obviously, we need to examine the reasons why we may not want them to return.
Cougars and wolves were once present in the eastern United States in healthy numbers, indicating that the native people living here at least tolerated these predators. As a result, a peaceful coexistence existed among the three top predators for eons. Though the native people occasionally killed these animals for fur, they did not have bounties on them, they did not try to eliminate them from the landscape, and they did not live in fear of them.
In contrast, our European ancestors came from lands where large predators had long ago been virtually eliminated and where there had evolved countless stories and children’s tales expounding the ruthlessness, the diabolical cunning, and the danger of these animals (at least of wolves). European cultures have often viewed wolves as competitors for wild and domestic prey. In addition, wolves in Europe appear to view humans more as food than their North American cousins (perhaps because of endless wars and hundreds if not thousands of human corpses left strewn on the landscape). As a consequence, our ancestors came to the shores of what is now the U.S. with a hardwired attitude that the only good wolf, or any other predator, was a dead wolf…period. And the war began.
The efforts of our ancestors to rid the eastern U.S. landscape of wolves and cougars has been well-documented. There were bounties, trapping, public hunts, and poisons, whatever means they could take to eliminate these animals. All because they feared that wolves and cougars would attack and kill them or that they would attack and kill their food sources, either domestic stock or wild ungulates such as deer and elk. The eradication efforts were very successful. Each eastern State has documented and heralded the demise of their “last” wolf or cougar.
Now many of us want them back! Were our ancestors wrong? Should we not fear for our lives? Will they not decimate our wild and domestic prey? I will address the first concern in this post.
Though we see a lot of guessing and second guessing about whether or not wolves and cougars reintroduced to the eastern U.S. would attack and kill us, the facts do indicate that yes, this is possible. I think it is safe to say that some humans in North America have been attacked and killed by these animals in the last century. But, a lot of things kill us.
What we really need to consider is 1) given the fact that wolves and cougars can kill people, what are the chances that you as an individual would be attacked or killed by a wolf or a cougar? and, 2) how do these chances or risks compare to other risks we face, often willingly, in our lives? If the risk of bringing back these top predators is higher than we are willing to take for other risks we freely face, then yes, it is a sound argument against reintroducing these animals. If, however, we freely face or are exposed to other risks much higher than being attacked and killed by wolves or cougars, well, then the fear argument becomes moot.
So, what are the risks? Let’s examine the risk of being attacked and killed by a cougar because the risk from wolves is exceedingly smaller (if cougars don’t present a significant threat, neither would wolves). Between 1990 and 2008 there were seven total deaths (around 0.4 mortalities per year) due to a cougar attack in the western U.S. This is unfortunate for the people involved, but how does this compare to other risks we take?
For this comparison, I will leave out the more common risks of driving and smoking, which kill hundreds of thousands of us yearly, but do note that we willingly take the risk! I will limit my discussion here to other animals, wild and domestic, that we accept in our midst. It turns out that black bears, ole Smoky and Yogi, kill around 1.5 people a year (the equivalent of 27 people) over that same eighteen year period. Yet we are willingly accepting them back into the East. 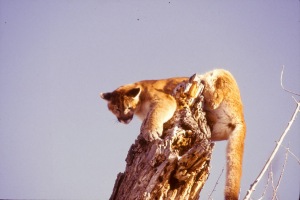 Domestic dogs, yes Rover and Shep, kill over 25 people a year (or over 400 during the above time span). That is 60 times more than from cougars, yet we don’t see any effort to eliminate dogs!
As deadly as our family pet is, it is still far from the most deadly (and socially acceptable) species roaming the eastern landscape…that honor belongs to the White-tailed Deer! Yes, Bambi! Every year deer kill around 120-130 of us, men, women and children. How do they do it? Well, some unfortunate people are actually physically attacked by deer but the majority of the mortalities are because of deer running into our cars, or vice versa.
So, during the 18 years when seven people were being killed by cougars, around 2,000 people were killed by deer. Are not these deaths as tragic as those seven killed by cougars? Did not their families mourn their loss as much? We hear about the seven and argue against having cougars in the East for safety reasons. Yet we do not see an effort to rid our states of deer. We do not hear people arguing that it is just too dangerous to have deer around and they should be shot on sight. We do not hear that the blood of all these victims is on the hands of those hunters and game agencies who brought the deer back. We accept the risk. Could we not also accept the miniscule risk we would face by reintroducing cougars to the eastern U.S. to benefit ecosystem integrity? It is also worth wondering how many of these 2,000 people would have been saved if we had cougars and wolves on the landscape to keep deer numbers down.  The fewer deer, the less accidents.
Another way that deer indirectly maim and even kill us is through Lyme disease. Deer ticks, feeding off of abundant deer populations, are the known transmitters of this disease to people. In the Northeastern U.S., over 14,000 people are infected with Lyme disease each year. From 1999 to 2003, there were 23 deaths resulting from Lyme disease. Yet the Center for Disease Control lists Lyme disease as a rare event and should not be of concern! During the same period, there were only three deaths from cougars across the entire western states. How would the CDC rate this threat? Close to non-existent!
Again we can ask how many of these thousands of people would have been spared infection and even death if cougars and wolves existed in the East. Bringing cougars and wolves back to the East might actually result in a NET saving of human lives!
I could go on with more comparisons, such as the 55 people per year killed while hunting or 750 deaths per year from riding bicycles. Or, more significantly, the 50 + children who die each year because their parents willingly encourage them to participate in school athletics. Are these deaths not as tragic? Yet we do not hear a hue and cry about stopping hunting or riding bikes, or disbanding all school athletics. We are willing to take the risk. If we are willing to take these and many more even greater risks in our lives, are we not willing to take one that is by all objective standards not even a risk at all?
So you see, the human safety issue regarding the return of cougars and wolves to the East is indeed a moot point. It is a red herring. Our forests need their top predators and we risk little to ourselves in bringing them back. But how about our cows and sheep? Won’t they kill them? And what about the deer, did I not just say that bringing these predators back would lower deer numbers? Is that something we want? Does not deer hunting bring in millions of dollars a year to state coffers? As I mentioned, this is the core of the second argument people use for not bringing back cougars and wolves; I will address this in my next post.

About the Author: John Laundré

I was born and raised in the Midwest (Wisconsin) and received my bachelors and masters degrees there. I received my PhD from Idaho State University in 1979. Since then, I have been working in large mammal predator-prey ecology for over 30 years and have studied predators and their prey in the western U.S. and northern Mexico. My experience includes working with cougars, wolves, coyotes, bobcats, deer, elk, bison, and bighorn sheep. I have conducted one of the longest (17 years) studies of cougar ecology and behavior to date and have published over 15 scientific articles both on this work and work conducted in Mexico. I am the originator of the concept of the landscape of fear that proposed that fear of prey for their predators drives many, if not all ecological processes. The one important aspect of this concept is that predators become instrumental in maintaining the balance between prey species and their habitat, not so much by killing their prey but affecting how they use the landscape. I am the author of the newly published book, Phantoms of the Prairie: The Return of Cougars to the Midwest that looks at the phenomenon of cougars actually moving back into the Great Plains region of the U.S. I am currently living in Upstate New York in Oswego where I am an adjunct faculty member at SUNY Oswego and also active in issues concerning cougars in the Northeast. I am the vice president of the Cougar Rewilding Foundation whose goal is the eventual re-establishment of viable cougar populations in the Eastern U.S.

Related Posts:
Ghosts of the Appalachians or Missing Actors?
Cougars and Wolves in the East: Where Would They Live?