From Bird Eggs to Orangutans: in 2018, The Alongside Wildlife Foundation Awarded over $10,000 to Wildlife Conservation Projects Around the World!

Today I wanted to let you know about the last round of projects we funded in 2018. This year alone, our first full year of existence, we awarded over $10,000 to wildlife science and conservation projects around the world. I hope you will consider helping us do even more by signing up as a recurring donor. There is still time to get in your tax-deductible donations for 2018.

Sometimes people tell me they feel silly signing up as a recurring donor for just a (tax-deductible) $1-2 a month and I tell them actually this would be great! If a fraction of my online followers signed up at this level we’d instantly become one of the world’s largest wildlife conservation charities.

Jon Johnston of the Nepal Tiger Trust received funds from the foundation to develop a citizen-science monitoring program for tigers in the buffer zones surrounding Chitwan National Park. This project will establish tiger report stations at the entrances/exits of buffer zone areas. Local tiger technicians will host meetings and presentations for the local communities to discuss the citizen science project, tiger conservation, and also hear concerns or suggestions from local people. Living alongside tigers is something that may be difficult to imagine for most people, but it is reality for people living in the communities surrounding Chitwan National Park. Local community-level conservation and monitoring efforts are necessary for this delicate and dangerous, relationship to be maintained while mitigating conflicts, misunderstandings, and negative perceptions. This project will work to elevate local people from victims to stewards of the tiger in their neighboring forests while collecting data that will help develop strategies for human-tiger coexistence on a larger scale.

Marc Filla with Georg-August-University Göttingen received funds to support his research on the ecology of snow leopards in Nepal with a focus on reducing conflict between these big cats and livestock owners. The aim of the project is to identify suitable management and husbandry measures that prevent livestock depredation by snow leopards and retaliatory killing of these large carnivores in Nepal. The results are intended to benefit long-term co-existence between local communities and snow leopards throughout their entire range. Based on the results from the research activities and with the support of the local cooperation partner, Global Primate Network Nepal (Rinzin Phunjok Lama), Marc wants to pinpoint conservation foci to governmental authorities and spreadour knowledge of the effectiveness of various anti-predator measures to local communities. This is intended to benefit both local communities and the threatened snow leopard to foster their long-term co-existence. 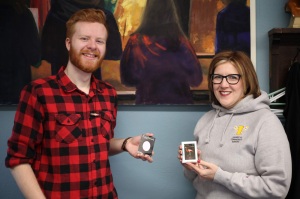 Cody Crawford of the University of Iowa Museum of Natural History received funds to produce copies of Egghead, a free, public domain educational card game which teaches children 12 and under about the nests and eggs of common North American birds. Curricula and activities accompanying the game use it as a springboard to teach children about animals, ecology, and environmental stewardship. Cody and his colleagues want to make biology as accessible as possible for children from every socioeconomic background.

Thomas Sharp of Wildlife SOS received funds to produce a film that that will provide essential information on how to stay safe in sloth bear country. It will include how to 1) avoid encounters, 2) diffuse encounters that occur, and 3) react to an attack to minimize the chance of death and injury. The film will also contain a conservation message about nature in general and sloth bears in particular. In many parts of India, the sloth bear is feared as much as the tiger or elephant; it is important that the public gain a better understanding of these bears so that they are not merely viewed as a nuisance or threat. In order to reach as many people as possible, they intend to make the film available free, via the internet, and in multiple native languages. Wildlife SOS is already conducting sloth bear safety outreach meetings, and would like to make the film part of this strategy as well.

Larissa Iasiello of Flinders University received funds to expand her project assessing the distribution of Little Penguins (Eudyptula minor) and identify their breeding status on a series of islands of the coast of South Australia. Due to rapid declines in some colonies, a thorough review of their breeding distribution and current status is needed to inform appropriate conservation strategies. Gaining more reliable knowledge on the little penguins’ natural history is needed; this project aims to be a piece in this puzzle by collecting data on individual islands that will contribute to our future understanding of little penguin breeding distribution.

Susan Sheward of Orangutan Appeal UK received funds to support Patrol and fire-fighting teams to protect and conserve the Sabangau Forest in Indonesia. The overarching goal of this project is to protect the Sabangau Forest and its inhabitants, such as the critically endangered Bornean Orangutan, from the significant threat of fires, caused predominantly by illegal logging activities. The main objectives of this project are to provide funding to the Borneo Nature Foundation (BNF) to enable 1) the community patrol team to continue their patrolling, community awareness, restoration and training activities, and 2) the fire-fighting team to continue extinguishing any fires that occur. This project provides a solution for living alongside wildlife in perpetuity, by providing employment opportunities for the local community as members of the patrol and fire-fighting teams that operate in the Sabangau Forest. This reduces the reliance on illegal logging activities, which cause fires and threaten wildlife. The patrol team also communicates with the local people (e.g. school children and illegal loggers) on the impact of illegal logging and fires on wildlife and the environment, which changes people’s opinions, and hence reduces human-wildlife conflicts.

Want to help us do even more to create and promote science-based solutions to living alongside wildlife in perpetuity? Please consider joining our growing network of recurring small donors here.