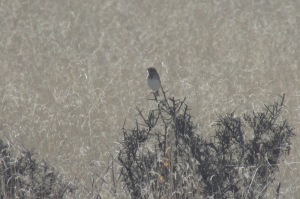 We walked in two expanding arcs, twelve people out on a blonde, grassy slope extending as far as the eye could see in either direction. To the north, the blue horizon outlined the Davis Mountains, named for our country’s second greatest traitor. To the south, dark trees and buildings mark the town of Marfa, West Texas capital of art and pretention. Black grama and other exuberant grasses abound, every few feet another kind, another patch, all with its own version of fruiting structures; some curly, others wispy, some downright spiny and sticking into my socks.  We spread out into a wide circle, like the scientists trying to work out the dimensions of the flying saucer in The Thing From Another World. At its apex we’ve erected a 60 foot long, ten foot high net with fine filament, fine enough to get repeatedly tangled with tumbleweed.
Sebastian, a tall, immediately likeable Peruvian, lifts and waves his staff and we begin closing the circle, walking deliberately toward the net. It takes a few minutes, each volunteer walking, waving their sticks, tapping them on the ground and through the grass. Birds flush and we stop. A single bird rising in a chaotic flutter, making a characteristic twittering, is a chestnut-collared longspur, on winter vacation from the bleak prairies of North Dakota. Fatter birds rising together, wheeling, peeping, are horned larks. We continue. A single bird flies a low trajectory parallel with the grass.
“Bird!” Denis calls out. We stop. We track its flight across 50 yards, it dips, lands in the grass. “Down!” she says. We continue. We flush about five more birds until we cinch the circle to the size of a backyard basketball court.
“Ok, let’s go slow everyone!” Sebastian calls.  “Everyone! I can see the birds.”
I’m standing next to him, so I look down. In the mixed gravel-dirt and grasses, a lizard scuttles across the dirt. But it’s December, and just above freezing. It was no lizard. 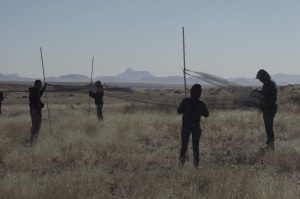 “Let’s flush them one at time into the net,” he directs, “Really slow, one at a time. Listos.” The volunteers are a mix of gringos who speak only English, Mexican Americans who speak Spanish and English, Mexican students from Chihuahua who speak Spanish and English, and the principal investigator, a blonde woman named Mieke Titulaer who lives in Mexico and is teaching her newborn to speak Spanish, English, and Dutch. The commands switch idiosyncratically from English to Spanish and sometimes I can’t tell what’s going on. We walk forward.
A little brown bird—a little brown job—bursts from the grass, flies like a grasshopper and careens toward the net. Fabiola and Denis toss Frisbees. The bird ducks the soft toys, plows into the net. Denis runs out and gathers the bird from the filament, bags it. We walk forward. Another bird flushes and is captured by Fabiola. We continue.
A bird flushes and heads away from the net. Everyone yells “Bird!” It’s heading my way. I raise my sticks and Kimberly, a student from Chihuahua, starts doing jumping jacks. The bird dives down between us. We take a few steps back and then move toward the clump of prickly pear cactus where it dropped. The cactus grows from a raised mound of gravel and dirt with large holes—the characteristic burrows of a banner-tailed kangaroo rat, the largest rodent of its kind in the area, a white-tipped, cheek-pouched, big-footed creature and indicator of excellent grasslands. We search for the bird, beating with our sticks, and I start to wonder if it actually went down a burrow. Then the bird darts out of the clump, runs like a mouse, we chase it. It flies low and away behind us. A miss. We continue.
The circle is the size of a small house. We know there are at least three more birds in front. Then one, two, five birds are up at the same time, and then the net has seven dangling little birds. There is a melee as all volunteers with bird handling experience try to get them all secured. Now thisis the kind of birding I can get in to. This wasn’t your typical, coward’s birding, standing freezing your ass off at six in the morning in the cold, walking around with a bunch of nerds glassing a sapsucker on a tree. This was running around, chasing things.  Flushing, beating, flanking. This was heroic birding. This was like herping.
Five minutes later we’re back at the vehicles, and eclectic cloth bird bags are bouncing from a line tied across the back door of the SUV. Fabiola and Denis break out the equipment. The birds will be measured, weighed, banded, and some will get a tiny backpack tied between their wings that will tell Fabiola where they go from now until March.

I was out helping Fabiola with her research project, part of a trans-national effort to study the ecology of rare birds intimately tied to grasslands. Incorporating researchers and volunteers from Mexico, the United States, and Canada, it is an ambitious project, standardizing effort and methods across an enormous swath of North America, from Chihuahua and Durango to west Texas, from Colorado and Montana to Alberta and Manitoba. Formerly, a suite of birds ranged throughout that vast region, and the grassland stretched unbroken from the windswept foot of the northern Rockies to the honey-colored plains of the Mexican Plateau. Short-eared owls, burrowing owls, ferruginous hawks, Swainson’s hawks, northern harriers, prairie falcons, aplomado falcons, horned larks, larkspurs, pipits, and a dozen kinds of sparrows occupied the grassland. The Dixon Water Foundation property north of Marfa, where we now captured birds, has been visited by all of them.
The most highly coveted, from a birder’s perspective, is a sparrow. Two of the volunteers were on a birding tour of Texas and volunteered today so they could see it. They stood around at lunchtime talking about birds they recently “had”—that peculiar figure of speech birders use, as if seeing a bird was the same thing as ordering a Rueben sandwich. The reason the bird is so highly regarded has nothing to do with its attractiveness, although, for a sparrow it is quite dapper. And it may not be all that rare. It’s just hard to “have.” You could walk these grasslands all day, where there are probably hundreds, and never see it. Or you might catch a glimpse but there would be no way to confirm it. They don’t tend to perch or flush. They prefer running along the ground like a mouse. They belong to a group of grass-running sparrows—along with Henslow’s, LeConte’s, Botteri’s, and Nelson’s, all of which are coincidentally named after people—that are maddeningly difficult to get a good look at. And we had them in hand. They have the typical tabby-patterned back of most sparrows, but with a handsome, tan face, and thick black streaks contrasting with a plain white chest and belly. Its song is a sweet up and down whistle, quiet and nearly the pitch of an insect, followed by a pleasant downward trill. Itwas named for Spencer Fullerton Baird, the 19th century Smithsonian curator and, namesake also for a sandpiper, tapir, and ratsnake. 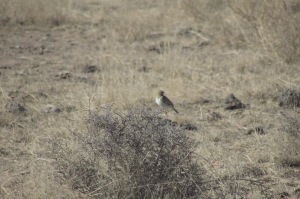 Baird’s sparrows winter in shortgrass prairie and desert grasslands from Durango and Chihuahua to west Texas and southern Arizona, and around March they at last lift themselves from the ground to fly direct to their breeding range in shortgrass prairies of Montana, North Dakota, Manitoba, and Alberta. They take part in that peculiar shell game of migratory birds. When they leave the Marfa area, these same grasslands, now apparently unfit for their use, are happily occupied by Cassin’s sparrows, which use them for breeding. Likewise, the breeding range of Baird’s sparrows, which becomes a snowfield in winter, is perfectly suitable for wintering American tree sparrows, which arrive from breeding grounds further north.
All of these grassland birds were formerly much more common. Fabiola wanted to determine their ecological requirements, especially their overwintering biology, and to understand what is contributing to their decline. Baird’s sparrows have experienced a 77% decline since 1966.
Fabiola and I talked about this while moving the nets after capturing several Baird’s and grasshopper sparrows, which have also declined significantly in recent decades. 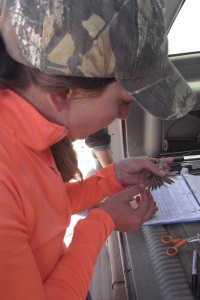 “You say you’re studying the birds to understand their requirements, when I think we know why they’re declining.”
“Yes,” she agreed, “They don’t have any place to go. It’s like everything else. They can’t survive if you let a grassland turn into a creosote flat. They can’t survive if you turn a grassland into center-pivot agriculture.”
Fire suppression and overgrazing has led to shrub encroachment, turning formerly diverse desert grasslands like those near Marfa into shrub deserts like the sea of creosote and mesquite up near Ft. Stockton and Midland. Unsustainable irrigation—the mining of fossil aquifers—has destroyed more of the bird’s wintering and breeding habitat. Birds are now restricted to tiny remnants of a once vast ecosystem that included grass-running sparrows, banner-tailed kangaroo rats, black-tailed prairie dogs, prairie rattlesnakes, massasaugas, horned lizards, pronghorn, and bison.
In small reserves, and on forgotten, neglected ranches, prairie remnants remain. The Janos grassland in Chihuahua, where members of the team join Mexican collaborators for training, has almost the entire cast of characters, including bison, and was recently the location of the first black-footed ferret reintroduction in Mexico. The grasslands in west Texas are missing bison for the most part, could use more prairie dogs, and would welcome the arrival of ferrets. Ranchers opposed a recent effort to reintroduce the ferret on a private ranch in the Texas Panhandle—you might say that the position was hypocritical, given the usual stance of Texas ranchers regarding the rights of private landowners.
The grasslands and their birds, mammals, and reptiles will therefore remain fragmented, degraded, incomplete, declining, and fought over, for the foreseeable future.
Maybe one day we’ll integrate grassland management on a large scale, and these early trans-national research projects will be remembered as the obvious template for cooperation. Ranchers will trade their cows for bison, prairie dogs will lose their nuisance mystique (show me evidence cows step in their holes and injured themselves), ferrets and wolves will return, barbed wire fences will fall, and fire will be thought of as a management tool instead of disaster. The Janos grassland in Chihuahua will be linked by an archipelago of restored shrublands to the Marfa and Marathon grasslands in Texas, with free movement allowed between.  Maybe sparrows will return.
But for now we had more birds to catch. We walked out into the diverse grassland, on to the next circle.